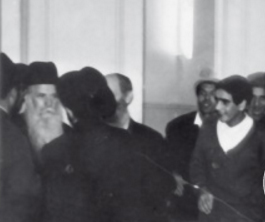 I heard of Rabbi Avraham Yoffen’s name for the first time from my father, Zatzal. He told me that when he studied in the Novardok yeshiva, there was a young man by the name of Avraham Pinsker there. He stood out for his regal mannerisms, his great love for all Torah scholars, and above all for his extraordinary way of studying. From time to time he presented his Torah thoughts to a group of students, and to a certain extent he brought about a change in the way Torah was studied in Novardok. Up to the time of Rabbi Avraham’s arrival, the study of Mussar was emphasized over the study of Gemara, but afterwards a new era began. Under his influence, students devoted themselves even more to the Gemara and to the regular method of study in yeshivot. Not long afterwards, Rabbi Avraham became the Rosh Yeshiva of all the Novardok yeshivot.

Rabbi Avraham was born in 5647 (1887) in a small town near Pinsk. In his youth he studied in Pinsk, which earned him the name “the ilui [genius] of Pinsk.” From there he went to the town of Krinik, where he studied with Rabbi Zalman Sender.

After years studying with Rabbi Zalman Sender, he left for the Novardok yeshiva to take shelter in the shadow of Rabbi Yosef Yoizel Horowitz, the father of all Novardok yeshivot.

Rabbi Yosef Yoizel recognized that Rabbi Avraham was destined for greatness, and so he took him as his son-in-law. The wedding took place in 5673 (1913), and Rabbi Avraham became the right hand of his famous father-in-law, taking on an active role in the establishment of new yeshivot in order to spread Torah and Mussar. Rabbi Avraham thought that from that time forward, he could settle down to study and give lectures to his students in peace, but Providence had decided otherwise. The First World War erupted one year after his marriage, and the Novardok yeshiva was forced to flee all the way to Homel in the Ukraine. It experienced many troubles and misfortunes, particularly when its founder Rabbi Yosef Yoizel passed away. However Rabbi Avraham’s morale was not shaken, and he immediately took the reins in hand. With superhuman strength, he encouraged and supported the yeshiva students so that they not lose hope.

After the war began, the Russian revolution broke out and Russia was eventually subjugated by the Communists. They began to persecute yeshiva students by imprisoning them and forbidding the study of Torah. Rabbi Avraham, as head of the army of yeshiva students, gave an order: Do not give in! He perceived in this situation a decree for destruction, one for which a person must be willing to even lay down his life, and he continued to fight against the communists with great determination and extraordinary courage. At that time the Novardok yeshivot had some 600 students among its ranks, with people studying in secret. They even studied Torah in prison, with pages from the Gemara and books of Mussar being smuggled to those behind bars in salted fish and other foods.

In 5681 (1921), Rabbi Avraham Yoffen was also imprisoned with a certain number of his students. Without being troubled by prison or the dungeons of the Bolshevik secret police, they continued to live as they had in the yeshiva: Studying, praying, and listening to the Rosh Yeshiva’s words.

After two years of bitter fighting, they realized that they could not continue indefinitely like this, and so Rabbi Avraham asked Rabbi Israel Meir, the Chofetz Chaim, whether he should continue to place himself in danger or depart from there. The Chofetz Chaim decided that they should leave Russia and travel to Poland.

Thus the escape from Russia to Poland began. Rabbi Avraham was the first to cross the border, and the order was then given to flee to Poland at all costs. They began to smuggle themselves out by various ways and cross the border in little groups, and with G-d’s help they almost all managed to escape. Rabbi Avraham settled in the town of Bialystok, where he reopened his yeshiva.

The Beit Yosef Yeshiva, named after the founder of the Novardok yeshiva (Rabbi Yosef Yoizel), quickly found itself in Bialystok as the center of all the Novardok yeshivot. The Rosh Yeshiva, Rabbi Avraham Yoffen, lavished his students with marvelous teachings. Besides his courses in Halachah, he gave courses in Mussar to all his students. The yeshiva remained in Bialystok for 18 years, and during that time thousands of students were educated there, all evoking the name of Rabbi Avraham with love and admiration.

During the horrendous Holocaust that began in 5739 (1939), Jews saw yeshivot destroyed and their students massacred. Rabbi Yoffen fled and managed to make it to the shores of the United States with a group of students. He once again had to take it upon himself to rebuild from zero, and with extreme zeal he began building a yeshiva in Borough Park, Brooklyn. He remained in America for 20 years, and there he succeeded in educating students in a spirit that was truly his own.

His final stop was Eretz Israel. In 5722 (1962), he left for Eretz Israel and founded a kollel in Jerusalem that was affiliated with the Beit Yosef yeshiva. His spiritual activities were not limited to the students of the kollel, for his house was open to all yeshiva students throughout the country. It hummed all day long with numerous visitors who came to hear words of Torah, ask for advice, or simply to find themselves among the Rosh Yeshiva’s entourage, the last of the famous Roshei Yeshiva of Poland and Lithuania before the Second World War.

I encountered Rabbi Avraham Yoffen for the last time in 5729 (1969) in the Galei Zanz Hotel in Netanya, and at that point he was already very old. I spoke with him for a long time, and as he told me of his new projects, I was amazed to see just how alert and aware he was of all the problems in the world. Every morning he prayed at sunrise, and all day long he could be seen walking with Gemara in hand, immersed in four cubits of Halachah.

He continued to give lectures up to his final day. The night before Passover, after the search for chametz, he felt ill and went to lie down, yet he still managed to give orders for the following day regarding several charity concerns. On Sunday Nissan 14, 5730 (1970), Rabbi Avraham Yoffen rendered his soul to his Creator. He was buried on the eve of Passover in Har HaMenuhot cemetery in Jerusalem.

The news of his passing spread throughout the country, and even though it was the eve of Passover, thousands attended his funeral, among them being Rabbis, Roshei Yeshiva, and yeshiva students. With the passing of Rabbi Avraham Yoffen, people felt that a great era in the history of the Jewish people – that of the Roshei Yeshiva of Lithuania and Poland – had come to an end. May the memory of the Tzaddik be a blessing for us all