Peggy Stone was born Rosa Goldstein in 1907, in the family of Bialystok textile merchant Jakow Goldstein. The family moved several times, first to Berlin, then, because of WWI, to Moscow in 1914. Rosa was exceptionally good in music and already caught attention as a child. After 1917, they moved back to Berlin, and Rosa would start performing, playing piano, dancing and singing. She got the nickname Peggy because of resemblance to the American child actress, Peggy Montgomery. Her first success was in 1928 when she performed with her friend Laelia Rivlin as The Stone Sisters. Two girls used two pianos to play and sing a mix of jazz, ragtime, swing and schlager music. During that period they played at the Tivoli, the Trocadero and the Moulin Rouge. She also acted in a couple of movies.
The Stone Sisters: Peggy Stone (r) with best friend Laelia Rivlin 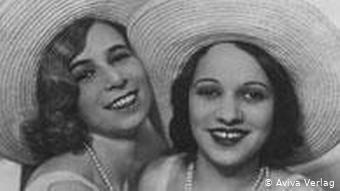 The Stone sisters
In 1933, amid rising Nazism, Peggy fled Germany to Sweden with her first husband, Polish fiddler B. Mitman. She divorced a couple years later and continued performing in Scandinavia and Russia where she toured Caucasus with the famous Utyosov jazz troupe, but later returned to Bialystok where in 1936 she married local businessman and her cousin Aleksander Zilberblat.
In 1939, Bialystok was captured by the Soviets, Alexander was arrested as a "capitalist" and exiled to Siberia. Peggy went to Moscow looking for a way to save him. While there, she worked with famous directors and poets on her Russian repertoire. After Hitler invaded Soviet Union, during the entire war she toured with the Chernovtsy Orchestra which played in Siberia for wounded soldiers and workers of defense industry. She married the conductor of the Orchestra and virtuoso violinist, Herman Hoenigsberg, a Romanian Jew from Chernovtsy. In 1945 they entered Chernovtsy with the Soviet Army and learned about the tragic fate of their relatives in Romania and Poland. They managed to flee to Bucharest and worked in Romania before moving to Israel. They had success everywhere, but not enough to make a decent living, so they decided to emigrate to the US.
There Herman continued with orchestras, but Peggy, at the age of 45, decided to start a totally new career - in fashion design - and soon became a successful designer.
Herman died in 1980, but Peggy outlived him by nearly 30 years. She passed away in 2009, at the age of 102. She was multi-talented, a natural optimist and had a good sense of humor and young spirit. A book about her was published in Germany,
By Alex Russakovsky 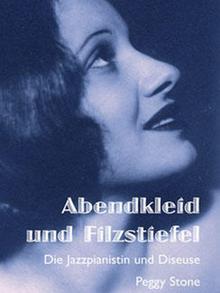