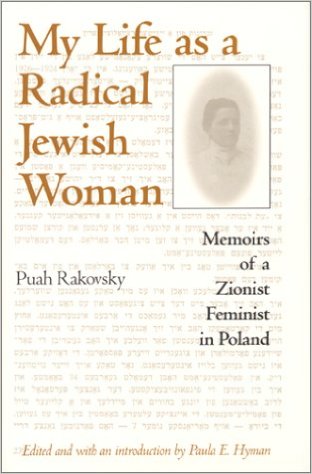 Referring to herself in her memoirs as a “revolutionary Jewish woman,” Puah Rakovsky included her personal struggle for autonomy together with her Zionist and feminst activism in her self-definition. She dedicated her long life to struggling for the empowerment of Jews, and particularly of Jewish women.

Puah Rakovsky was born on July 3, 1865 in Bialystok, Poland to a seventeen-year-old father and a fifteen-year-old mother. The oldest of fifteen children, she grew up in a traditional family, descended from a long line of rabbis. Her father, Menahem Mendel, although rabbinically trained, was a prosperous commission agent. She began her education in a heder open to both boys and girls and subsequently was tutored at home in Hebrew and Jewish texts as well as secular studies, but her parents refused her request to study in a gymnasium as that would necessitate violating the Sabbath. She was an unusually bright student, whose translation of a story appeared in the Haskalah newspaper Ha-Zefira in 1880. Her experience of the gender division in Jewish education led her not only to devote herself to girls’ education but to reflect in her memoirs, “If the Torah had been taught without distinction of sex, if both Jewish girls and boys had studied our Torah, culture, and customs, then how many thousands of Jewish mothers would have been saved from assimilation and conversion, along with the Jewish sons we lost because of the education they received from their assimilated mothers.”

Rakovsky’s arranged marriage at the age of sixteen to Shlomo Malchin, a yeshiva student ten years her senior, was extremely unhappy. As a young adolescent she had lost her faith, and she wanted to continue her studies even after her marriage. After giving birth to a son, Yehuda Ber, when she was eighteen and a daughter, Sheyna, when she was twenty, she persuaded her parents and husband to allow her to study to become a teacher in order to be able to support the family so that her husband could continue learning. This was her first revolutionary act, for she planned to use her new credential to earn enough to sustain herself and her children after leaving her husband. After years of struggle, she succeeded in securing a divorce. She married twice more, for love: to Abraham Krislavin, who died of tuberculosis, and to Mordecai Birnbaum, with whom she had a daughter, Sarah, born in 1903. She considered her decision, against the advice of her friends, to marry Birnbaum, ten years her junior, to be another personal revolutionary act—a defiance of custom.

With her license in hand, she was hired in 1889 to teach Hebrew in a girls’ school in Lomza. In 1891 she was invited by the Zionist society Bnei Moshe to teach in and direct a modern Jewish private school for girls in Warsaw. According to different sources, it was either the first Jewish girls’ school in Warsaw or the first in which Hebrew was a substantial element of the curriculum. Two years later she established her own gymnasium for Jewish girls. She served as its director until World War I led to its demise and she relocated to Vilna for two years. In the years before World War I she also sponsored a summer camp/boarding school for girls in Otwock, a suburb of Warsaw. Her school became renowned, largely because of its emphasis on teaching girls Hebrew and Jewish subjects. She herself became well known in Warsaw and was the fictionalized heroine of a novella, “Rabbi Shifra,” written and published by Ben-Avigdor in 1893.

Upon arriving in Warsaw, Rakovsky became involved in Zionist activity. She was drawn to Hibbat Zion, the Love of Zion movement, although she found its antipathy to the involvement of women disturbing. An early supporter of Herzlian political Zionism, she attended several Zionist congresses and became a member of Ze’irei Zion. She focused her activism, however, on Bnos Tsiyon, a women’s party that developed from the women’s commission of the Keren Kayemet le-Israel (Jewish National Fund), and on whose national board she served.

Rakovsky believed that women would achieve political influence and ultimately equality only by organizing separately to define and lobby for their particular issues. In 1918 she published a Yiddish pamphlet, Di yidishe froy, which called on women to become more active in Zionist work, to found a national Jewish women’s organization, and to press for female suffrage in Jewish communal elections. A delegate to the 1920 London meeting that established WIZO, she became its first representative in Palestine during her year’s stay there, without her husband and daughter, in 1920–21. Living in Jerusalem, she pursued her goal of empowering women through education by opening a vocational school for girls. She also lobbied actively for women’s suffrage in the first elections to the Yishuv’s Asefat ha-Nivharim (Elected Assembly).

Returning to Warsaw, Rakovsky became one of the founders and secretary of the Jewish Women’s Association (Y.F.A.), a national organization sympathetic to Zionism, non-partisan but explicitly feminist. Its central goals were to provide secular and vocational education to Jewish women, in order to prepare them for making a living in the straitened economic circumstances of interwar independent Poland. The organization’s programs ranged from summer camps for children and youth and the provision of vocational education to girls and young women to international efforts in support of abandoned wives and courses and lectures (in Yiddish) on Jewish and Polish cultures. In 1925 Puah also served as co-editor of the Association’s short-lived monthly journal, Froyen-shtim (Women’s Voice), founded in recognition of the fact that the established Jewish papers were not prepared to allow women to speak for themselves. Rakovsky and her two co-editors, Leah Proshansky and Rachel Stein, asserted the need for middle-class women, “those of us who can speak,” to assume responsibility for effecting social change, as equals with men. In 1928 Rakovsky published a second Yiddish pamphlet, Di moderne froyen-bavegung (The Modern Women’s Movement), which placed the Jewish women’s movement in an international context and argued that Jewish women had to organize on their own behalf to secure civic and political equality, equal right to work and equal pay, and equal opportunities for education. Within the Jewish community, she emphasized, women had to become leaders and not simply work under male direction.

In the 1920s and 1930s, in addition to teaching and working as a paid functionary for the Palestine Office in Warsaw, Rakovsky supported herself through translating. She translated from German, French, and Russian into Yiddish, primarily literary works but also memoirs and history. Her translation of Leon Trotsky’s autobiography led the Soviet Union in 1932 to ban her from reentering the country. In 1928 she had spent six months there, to see what Communism had accomplished and to visit her son, who as a Communist had settled there after the Bolshevik Revolution. She never saw her son again.

In 1935 she made aliyah for the second time, settling first in Jerusalem but also becoming known in Tel Aviv. While supporting herself as a translator for the Zionist movement, she continued to participate in teacher training workshops and to disseminate her views on women’s organizing. In 1937, for example, she wrote an article in Devar ha-Po’elet, the women’s newpaper of the labor movement, in which she promoted the position that women organize a separate women’s list in elections in the Yishuv, a position opposed by the labor movement. Her memoirs, which she wrote between 1940 and 1942, were published in Hebrew in December 1951 and in Yiddish in 1954.

Rakovsky spent the last decade of her life living with her daughter Sarah [Birnbaum] Cohen’s family in Haifa. She died on May 13, 1955, just two months short of her ninetieth birthday. She was eulogized for her many important roles, as an educator, translator, organizer of women, and an early socialist Zionist. She was, in fact, a revolutionary Jewish woman, a feminist and Zionist leader, who lived her life independently even while raising three children and two orphaned grandchildren.