A very interesting interview with Annie Lew, born in Białystok 1911.
I believe that it was recorded and my cousin took it and typed it out years ago. Here are the typed out pages, in PDF.
Reviewed by Bob - cousin of Hilary Levine and Meir-his son
Thanks to Hilary Levine 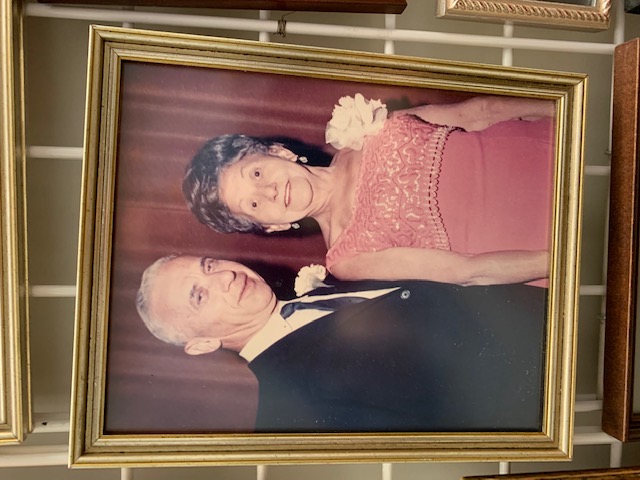 January 29, 1992 Meir and Bob interview Savta Annie
Bob: This is Meir and Bob talking to Savta Annie. What’s the date today.
Today is January 29,1992, and Meir is going to start off with some questions for Savta Annie.
Meir: What brought your original family members to this country?
Grandma (misunderstanding the question): What brought my family to this country?... Hal,Grandma Frances…
Bob: Meir wants to know what originally brought members of your family to this country. Why did you and Grandpa come to this country, for instance.
Grandma: Who could remember? That’s my brother and my sister. That’s all. They brought us tothe country. My brothers and my sister.
Bob: So your brother and sister came first?
Grandma: Oh yeah. They was here first, sure-
Bob: Who were they?Grandma: My sister!
Bob: Which sister?
Grandma: My real sister. My real sister.
Bob: You had two sisters, right?
Grandma: One sister’s in Florida, and one sister died. That’s all.
Bob: Yeah: And it was which sister who brought you over?
Grandma: Clara.Bob: Clara.Grandma: Yeah.
Bob: And your brother? Which brother brought you over?
Grandma: Eh, that was Sam and Harry.Bob: Sam and Harry.Grandma: Yeah. Both, yeah.
Bob (to Meir): Do you know who Sam is? Grandma’s brother Sam was Josh Kuzon’sgreat-grandfather. That’s how you’re related to Josh Kuzon… That’s O.K., what’s your nextquestion?
Meir: What language did your ancestors speak?
Grandma: What English?
Meir: What language.Grandma: Polish. Jewish. Now in American. Now English. Now in American.Bob:
Grandma, when you were born, born in your city, the city of Bialystok…
Grandma: Yeah.
Bob: Was it part of Russia at the time, or was it part of Poland?
Grandma: That was Russia and Poland, was together. Who could remember?
Bob: You don’t remember.
Grandma: I don’t remember. How could I remember?
Bob: So you spoke Polish as a little girl?
Grandma: Yeah.
Meir: From the time of your birth to the time you were approximately twelve years old, wheredid you live?
Grandma: I lived in Bialystok. I was born in Bialystok.
Bob: Can you describe the street that you lived on and the house that you lived in?
Grandma: I was eh where the shul is, where the big shul is.
Bob: Your house was close to the big shul of Bialystok?
Grandma: Sure.
Bob: How many shuls were there in Bialystok?
Grandma: Only one shul… the rest was like… what do you call this..
Bob: Shteebels?
Grandma: Not Shteebels. Like eh de Kodimoh… eh
Bob: Synagogues?
Grandma: Synagogues, yeah.
Bob: So there was a big shul and smaller shuls?
Grandma: Yeah.Bob: And you lived close to the big shul?
Grandma: We was close to the big shul.
Meir: What…Grandma: Fifty Jews got killed in the shul.
Meir: What...Did you live in a house or an apartment?
Grandma: I lived in an apartment.
Meir: Was it in the city or…Grandma: In the city.
Meir: Did you have a room at all to yourself or did you share it with someone else?
Grandma: We was all together in the same room, the rooms… yeah.
Bob: How many people were sleeping in the same room?Grandma: In the same room, we were about four people to sleep.
Bob: Who?Grandma: My sisters.Bob: You and your sisters, that’s three.
Grandma: Three? And somebody else.
Bob: Did your brothers sleep in the room too?
Grandma: I couldn`t remember. I couldn’t remember. How could I remember such things?
Meir: What about outside your house. Did you have a big or small yard? What games did youplay there?
Thanks to Hilary Levine
2021-10-28 06:00:44 history